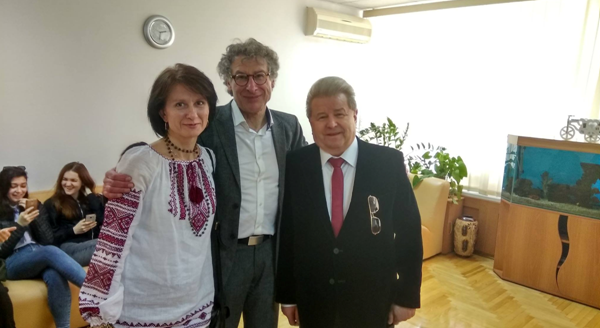 From the left: Dr. Tetiana Hranchak, Dr. Henryk Hollender, and Professor Mikhailo Poplavskii, rector of the University, a well-known artist, scholar and activist. You can find some of his books at Lazarski University Library. Picture by Oleg Serbin.

University of Culture in Kyiv (Ukraine, Київський національний університет культури і мистецтв, http://knukim.edu.ua/) surprised Lazarski University library director Dr. Henryk Hollender by inviting him to conduct a course for library science students. Having exchanged letters  with the  project coordinator Dr. Tetiana Hranchak, he decided that he would offer a short course in comparative librarianship, condensed to three sessions (пари) for the second year students in three days: April 24-27, 2017. In addition, a separate session would be devoted to the phenomenon of University of Warsaw Library, the largest academic library in Poland, which received a new widely appraised building in the year 1999, and whose initiatives, undertaken from the early nineties, have substantially contributed to the expansion of library services in the democractic regime adopted in Poland. The sessions took place in accordance with the plan.

The contents of the presentations, delivered in imperfect Russian with slides in perfect Ukrainian by Lazarski’s Olena Guk, seemed to have satisfied the participants, who asked questions and got involved in the discussion. Present were also several instructors from the chair of library, information and archival work.  It has to be stressed that several eminent practitioners from Kyiv’s research libraries teach at the University. This includes, to mention only the two, directors Serhii Nazarovets of Kyiv-Mohyla Academy and Oleg Serbin of Taras Shevchenko University. Ms Hranchak herself also serves as a political analyst at the Vernadsky National Library of Ukraine.

Hollender visited those libraries, as well as Kyiv Polytechnic Institute and Vernadsky National Library, and conducted very intriguing conversations with colleague librarians, many of whom he had already known from conferences. Ukrainian libraries have launched several major projects and are seriously interested in cooperating with Poland.

The story from the University of Culture of the visit and classes is to be found here: http://fk.knukim.edu.ua/news/46-novyny-ibas/564-ukrajina-polshcha-porivnyalne-bibliotekoznavstvo.html. 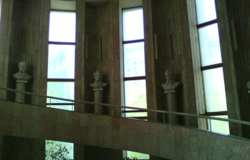 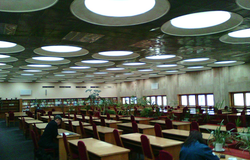 One of the reading halls and Vernadsky National Library. Picture by Henryk Hollender. 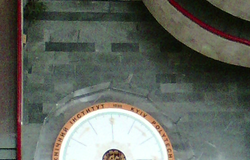 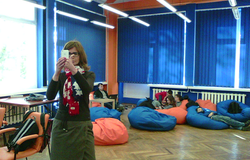 This Білка (squirrel) hall at Kyiv Polytechnic Institute is all run by the students’ union. On the picture (by Henryk Hollender) Maryna Druchenko of the KPI Library. 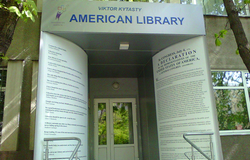 Entrance to the American Library and Kyiv-Mohyla Academy. 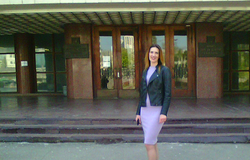 Vernadsky National Library, one more impressive and well-located library building in Kyiv, has a separate department which collects gifts to presidents of Ukraine. On the picture (by Henryk Hollender) Dr. Liudmyla Galagan, the head of the department. 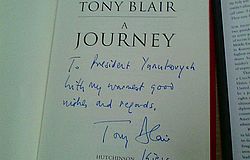 One of the items in the collection of presidential gifts at the National Library.