On 30th November and on 14th December 2020 two mediation sessions took place online. We dealt with the burning issues of workplace contract violation (a sort of breach of contract) that is happening between employees and employers of a hypothetical supermarket retail chain outlets. The two parties (employees v employers) were in dispute over unpaid overtime hours for shop cashiers and warehouse staff; promised salary raise and bonus for staff but unpaid by the employer; health damage of employees due to physical exertion caused by lifting heavy boxes and pellets of goods, and sudden dismissal of employees due to Covid-19 lockdown and economic slowdown caused by Coronavirus pandemic. 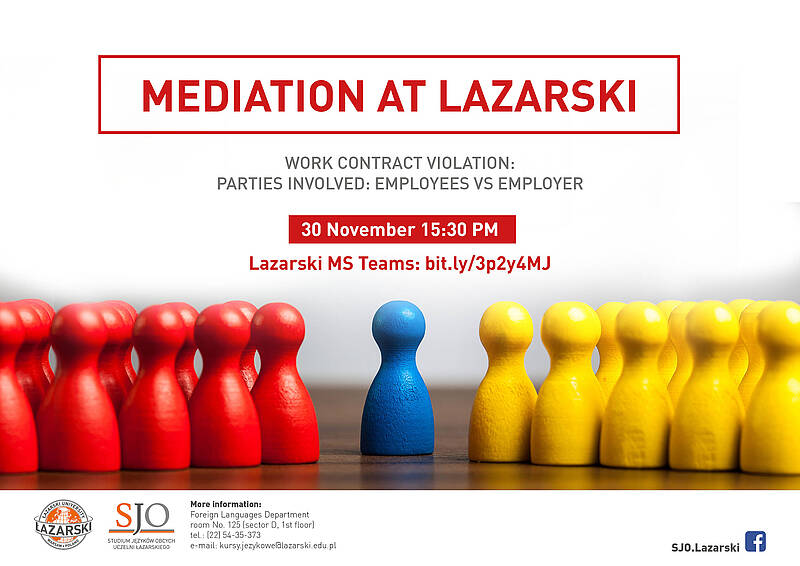 Most cases boiled down to claims of compensation and damages demanded by employees on the grounds of job contract violation / breach of contract by employer. All cases were presented by both parties involved and satisfactory solutions were needed: to achieve this we explored several options during the negotiations stage. Both parties recognized the problems at hand and accepted the need to find an amicable solution, without the need of taking the case to court.

Both parties had legitimate grounds for a court case, but instead, chose to offer creative solutions and accepted the need for a compromise. Notably, employers aimed at the win-win outcome, rather than a maximum profit and zero liability. It must be said that despite the sometimes dramatic scenarios presented by employees, they were able to see beyond their personal grievance and negative feelings and worked towards reaching a reasonable consensus.

All cases were amicably reconciled and in most cases a compromise was reached. Not all aggrieved parties of employees achieved all their goals as stated in the original claims, but most of them reached a partial success and were reasonably satisfied.

The audience members assisted us in the decision making process. On their part, a voting in favour/against the negotiated settlement was conducted. Those in favour of employees accepting the negotiated solution and those in favour of pressing further charges in order to gain higher compensation and damages from the accused party expressed their opinions via chat and by voting. Predominantly, the audience favoured the already negotiated compromise between the claimants and the accused without the necessity of taking further legal steps. This, indeed, was the purpose of mediation between the parties of the dispute and proved the effectiveness of mediation as a way of resolving conflicts in the workplace.

Mediation offers a low-cost alternative to lengthy and complex court cases: there is no need for court case formal proceedings and payment of exorbitant lawyers’ fee; it saves time as only two one-hour sessions were required to reach an agreement, and results in a mutually satisfactory outcome of a workplace dispute. We are therefore looking forward to seeing more cases solved by mediation procedures in real life.