A book entitled “Ukraine and Russian neo-imperialism: The divergent break” written by Ostap Kushnir is one of the two books ever published in the US with a clear affiliation to Lazarski University. The book portrays Ukraine as a young post-colonial and post-communist state which, unlike Russia, is more prone to democratize and decentralize. The book was published by Lexington Books, a sub-division of Rowman and Littlefield, one of the world’s most renown academic publishers. In a short interview the author talks about his writing process and the impact which book made on his career. 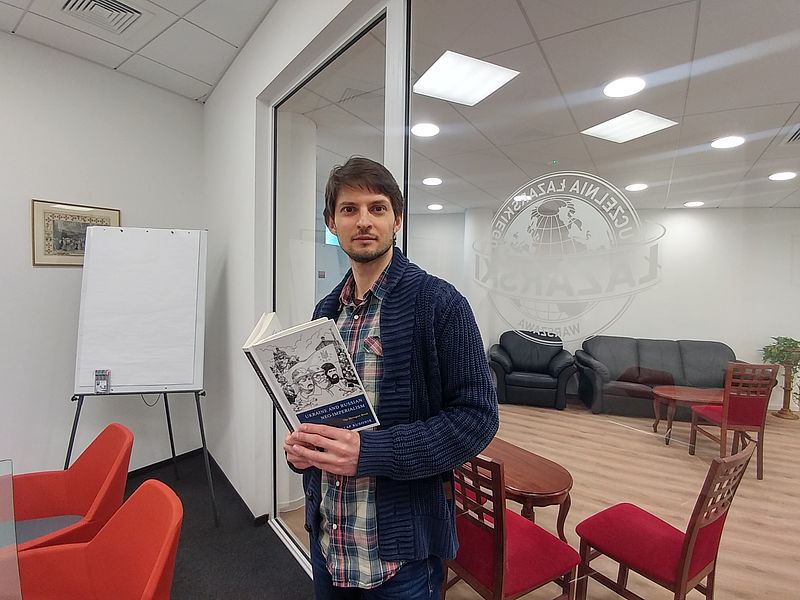 What inspired you to write a book?

My adventure with “Ukraine and Russian neo-imperialism: The divergent break” started on July 26, 2016. On that day I was finalizing my presentation for the American Political Science Association (APSA) annual meeting and exhibition. Out of the blue I received a mail from a Senior Acquisitions Editor, Lexington Books, who asked whether I was interested to publish a book on the topic of my presentation. That was some kind of a wonder! My name and topic were noticed and distinguished by the Lexington Books editor from among 10.000 names and topics of other APSA presenters.

They say you have to be good to be lucky. What happened next?

At the beginning of September 2016, I had a meeting with the Lexington Books’ team in Philadelphia, US. We discussed the content of the book as well as agreed upon deadlines. Afterwards, I did the lion’s share of research, organizational and financial job on my own. First chapter was ready by November 2016. The full book was ready by early May 2017. All in all, it took me eight months to conduct the researche and write the book from a scratch. The book was written and published with no external funding.

How did the book writing process influenced your work with students?

I tried to find enough time for all activities: researching, lecturing and administrating. That was not an easy deal as I run classes at validated programmes in International Relations, performed functions of programme director for BA in Management, supervised thesis of around ten students, worked on other researches and articles, and – one of the most burdensome activity – organized international conference “Intermarium in the 21st century: Visions architectures, feasibility.” In a word, November 2016 – May 2017 were very harsh eight months. I worked seven days a week, usually from 9.00 till 23.00. At the same time, I cannot recall any student complaining on my inaccessibility.

Majority of authors eagerly await the first reviews. What were reviewers’ first impressions about the content?

On early May 2017 the book manuscript was submitted to Lexington Books. These were five chapters counting 75.000 words. My reviewers liked the manuscript. Their feedback was very positive with only minor improvements suggested. The book was published and put on sale on February 15, 2018. As you may see, the whole process took around 1,5 years to be completed.

The book is also being very powerfully promoted today. To my knowledge, it is already in the libraries of Toronto and Harvard Universities. Curious readers can find some of its chapters it at the Google books.

Did the book influence your academic and research career?

Significantly! It started changing my life. On a minor scale, I had a noticeable boost in numbers of twitter followers. I also launched a regular correspondence with the world’s most renown scholars from Oxford, Harvard, Toronto, Leuven, and other world’s top universities.

Sounds impressive. But wait, are these only “minor scale” changes?

Indeed, these are. On a major scale, I became much more internationalized and recognizable than before. I gave a skype interview to Toronto-based journalist William Szuch and his channel Uketube. Many more requests to join research groups or provide expert knowledge followed. For instance, I was asked to write an analysis for Royal United Services Institute – RUSI, one of the world’s oldest think tanks. They claim to have 40.000 readers per day! I also gave comments to the Spanish newspaper “El Confidencial” about the contemporary situation in Ukraine. Finally, I was invited to participate in the 2019 international conference “Ireland, Ukraine and Empire: Colonialism and Conflict 1800-2017” co-organized by the University of Toronto and Ukraine’s Academy of Sciences – Institute of History.

Congratulations on your international success. We wish you further career development.