Among the winners of the 11th edition of the "Rising Stars Lawyers - Leaders of Tomorrow" competition was Vladyslav Semerynskyi, a graduate of the Law field of study at Lazarski University.

Competition is organized by Wolters Kluwer Polska, under the patronage of Prawo.pl. It awards young lawyers, under age of 35, for achievements, ability to combine professional career with scientific work, creativity and innovation. The jury also evaluates the ability to sense new market trends, knowledge of LegalTech solutions, pro bono activity, as well as care for the quality of lawmaking and application.

"This award is a valuable distinction for me, in particular because I became the youngest laureate in over 10-year history of the competition. It is also of special value because it includes not only professional activity, but also charity, in which I was involved at the beginning of the war in my country." Vladyslav Semerynskyi summed up.

Vladyslav Semerynskyi is a 25 years old trainee attorney at law, he works at the law firm Squire Patton Boggs Krześniak sp.k. He comes from Kharkiv, from where he moved to Poland in 2015. He graduated from Law field of study at the Lazarski University's Faculty of Law and Administration, and in 2019 also from the University of Salzburg. He climbed the career ladder through the law firms: MKZ Partnerzy, Affre i Wspólnicy, DZP, Schoenherr, and since June 2022 he has been working in the international arbitration team at Squire Patton Boggs in the International Dispute Resolution department.

In 2020, he successfully performed in the largest legal competition Willem C. Vis International Commercial Arbitration Moot Court. He is also e.g. a co-author of the "Responsibility for defects in construction contracts" book, which will be published in November 2022 by Wolters Kluwer publishing house. Professionally, he advises entrepreneurs and public entities on the largest infrastructural disputes in the country, including disputes regarding the construction of stadiums, bridges, and electrical switchboards. He also helps in legalizing the stay and work of Ukrainian citizens in Poland. In 2022, together with the Ministry of Culture of Ukraine, he organized charity concerts of the Virsky's National Ballet of Ukraine, which took place at the Dramatic Theater in Warsaw and the NCK in Krakow. As part of these concerts, funds collected were allocated towards the civilian population of Ukraine. He also conducts pro bono cases for Polish foundations.

The winner is also one of the founders of a modern jewelery concept called Loyly's - he is the only jeweler in Poland who uses only man-made diamonds for the production of jewellery.

Congratulations on the success! 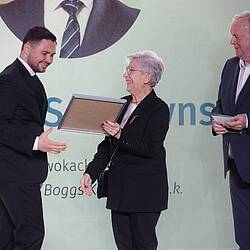 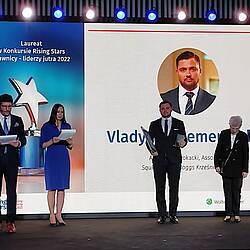